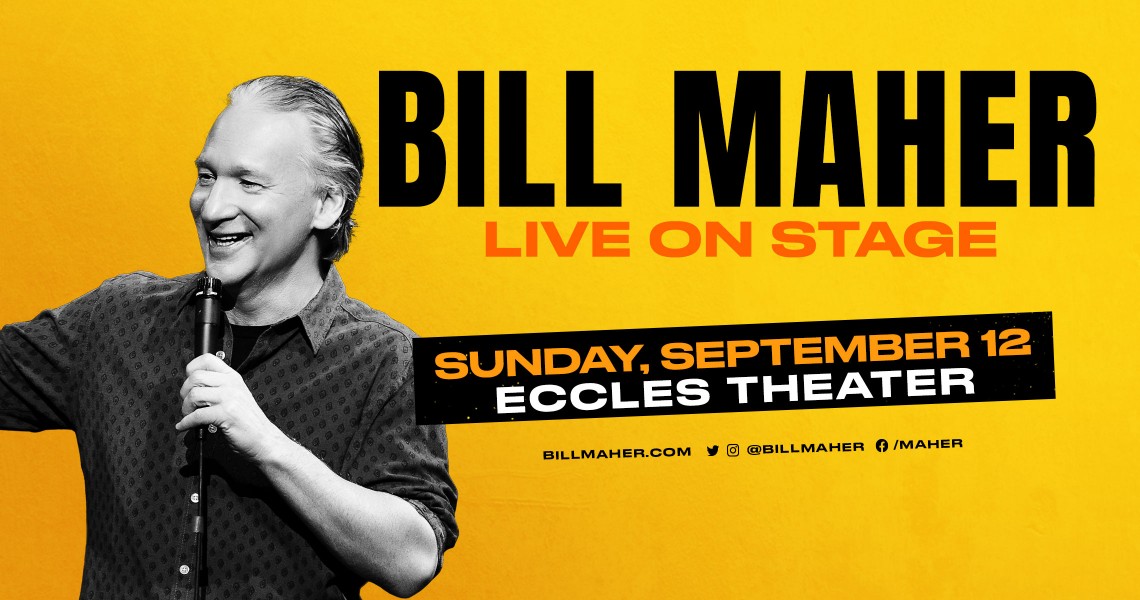 Live at the Eccles presents Bill Maher on September 12, 2021 at the Eccles Theater on Main Street in downtown Salt Lake City. ArtTix is the official source for tickets for Live at the Eccles events. Please note that all fans must present proof of COVID vaccination or a negative test to attend this show.  Read important details here.

For more than twenty years, Bill Maher has set the boundaries of where funny, political talk can go on American television.  First on “Politically Incorrect” (Comedy Central, ABC, 1993-2002), and for the last fourteen years on HBO’s “Real Time,” Maher’s combination of unflinching honesty and big laughs have garnered him 38 Emmy nominations.  Maher won his first Emmy in 2014 as executive producer for the HBO series, “VICE.” In October of 2008, this same combination was on display in Maher’s uproarious and unprecedented swipe at organized religion, “Religulous,” directed by Larry Charles (“Borat”). The documentary has gone on to become the 8th Highest Grossing Documentary ever.

Maher started his career as a stand-up comedian in 1979, and still performs at least fifty dates a year in Las Vegas and in sold out theaters all across the country.  Four of his ten stand-up specials for HBO – 2014’s “Bill Maher: Live from DC,” 2007’s “The Decider,” 2005’s “I’m Swiss,” as well as the hilarious, “Bill Maher … But I’m Not Wrong,” – have been nominated for Emmy awards.

RESCHEDULED INFORMATION:
In response to the ongoing Covid-19 health concerns, the planned engagement of Bill Maher on May 17, 2020 and April 24, 2021 has been rescheduled for September 12, 2021 to support the overall health and safety of the community. Bill Maher is postponed and a new date will be announced.